Dear Francis: we need to talk… 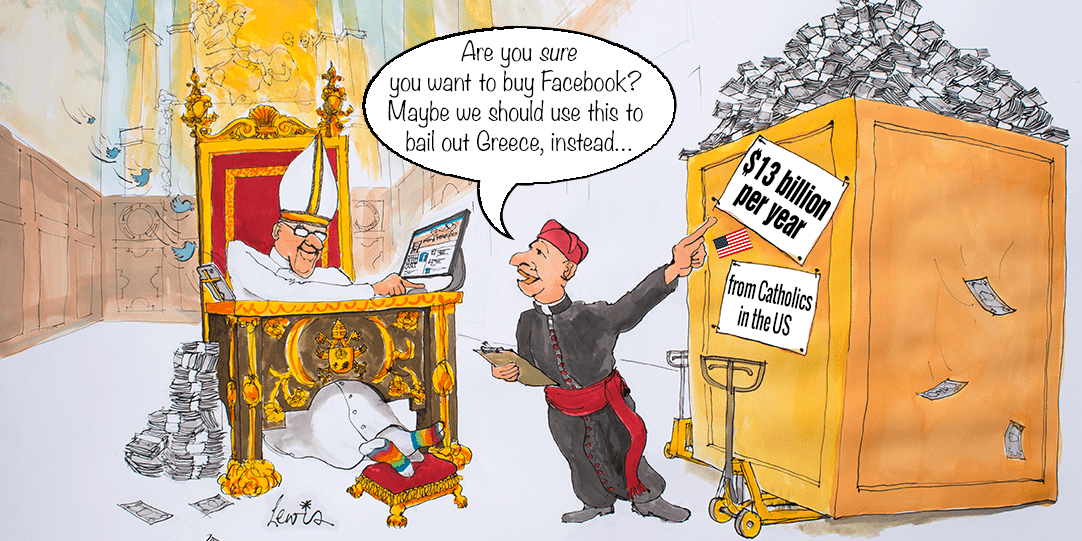 You’re getting fantastic press from all your new fans on social media. But we can’t be Facebook friends, unless you make some radical changes—because it’s religions that undermine economies …and almost everything else we value.

For centuries, the Church has preached penance, subservience and self-rejection, causing more carnage, abuse, dysfunction and despair than anything else in our history. On a worldwide scale, it has instilled in the human psyche a deep unworthiness, a belief in our innate sinfulness and a desperate need for acceptance and approval from a higher authority outside of ourselves (even if we’re not religious). Of course, it preaches forgiveness, too, but there’d be a whole lot less to forgive if we believed in our innate goodness—and acted accordingly.

We can’t undo the damage done by the brutal enforcement of early Christianity, but we can see its ongoing impact on almost every aspect of our society—including our economies. Yet these are just the symptoms of a much deeper problem: the religious programming that has undermined our autonomy. So, although you’ve spoken compellingly on the need for change, the Church itself has directly or indirectly generated much of the dysfunction you’re denouncing—and continues to do so.

Let me count the ways…

Anything that distorts or diminishes our viability as human beings is going to affect our economies, as well as our values, laws, politics, performance, health, relationships, self-worth and fulfillment. Economists might argue otherwise, but the prevailing psyche of a nation will always win out over other seemingly legitimate factors. The economy is not just at the effect of this phenomenon; it’s the most reliable indicator of it.

But I’d prefer to focus on how we can become more empowered to address our current challenges. So here’s an idea: since the Catholic Church is reputedly the wealthiest institution in the world, managing over $7 billion in assets and $800 million in equity, while receiving an estimated $13 billion per year from its 85 million American Catholics alone2, perhaps you’d like to divert some of that wealth into resolving the problems you’ve flagged—and maybe even establish schools that teach empowerment and healthy self-acceptance.

We can all pontificate about what’s wrong in our world, but understanding why things are the way they are—and why we are the way we are—is the only way we can hope to address the root causes of our dysfunction. If our minds are negatively programmed, we stay stuck in a cycle, with nothing fundamentally changing. New president, new pope, same old pyjamas. New policies, new words, same old dynamic. Changing our minds, though, changes everything. It’s the collective mindset of a nation that determines its ability to prosper in healthy, sustainable ways. Unless we address that, we’ll continue down the same self-destructive path. So, if you backed up your words with the funds required for meaningful action, I’d say amen to that—and this could become a whole new papal ballgame.

PS: I’d be happy to hop on the Alitalia ‘Shepherd One’ so we can chat about empowerment, spirituality, worthiness and all the other good stuff that enables humans to thrive. I used to think that POPE stood for ‘prevention of personal empowerment’, but I’m seeing some greater possibilities, now that you’re embracing your humanity—and ours.

Can you surrender to the good that’s trying to happen?

Head versus heart: why did they ever split up?

is a former UN international civil servant, an author, editor, disruptive thinker, therapist and mastery coach specializing in human dynamics, creative potential and conscious evolution. She has documented the bio-effects of wireless radiation, exposing the widespread corruption within the industry, WHO and governments, and writes widely on the true drivers of human dysfunction and how to reclaim our autonomy.

Her personal journey, what she learned and innovative solutions she discovered.

Tell me the truth

Discover what has been missing for you and how to get it back. Re-unite with the deeper truth about you and what it means to be fully human. Find out how to be truly ‘switched on’ and how to thrive as an enlightened, autonomous individual with a quest for personal excellence and fulfillment.

Find love, power up, and create wealth as you relax. Recorded by Olga, with soothing music and life-changing insights. Change your mind about what's possible, and make it happen.

Please log in again. The login page will open in a new tab. After logging in you can close it and return to this page.